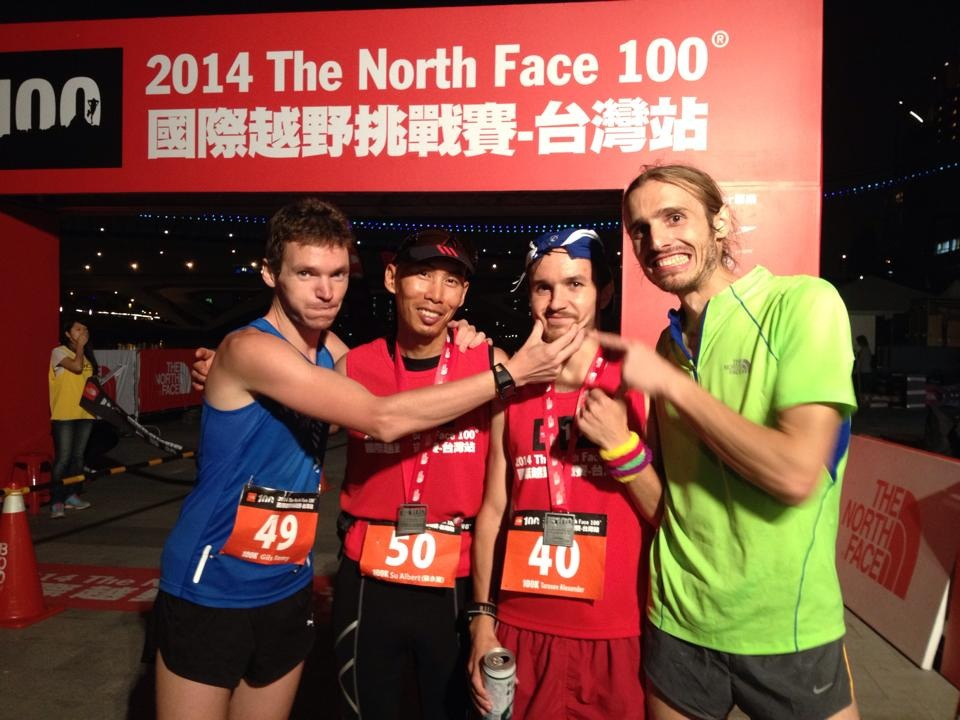 Finished the North Face 100K (62.13 miles) race in about 13:19 hours.  The average total ascent was about 3,387 meters and total descent was about 3,353 meters, in comparison the French Alps, Aiguille du Midi, elevation is 3,382 meters (12,605ft). This trail mountain and road race consisted of about two 900m mountain climbs and one 875m road climb plus mountain trail.  For these two segments, a gear bag was prepared for the mountain run and a bag for road run. The mountain bag was located at the 14K checkpoint, before the 900m high mountain run.  Inside was my Camelbak water bag, food, and trail running shoes.

During race day, the weather was nice 70F (21C) degrees and I felt good.  So good, that I ran pass the mountain checkpoint only briefly grabbing for a banana.  I didn’t know that this was the last checkpoint before the next water stop 17K away. Until I realized this, I was already on the longest, hardest, and most dangerous part of the course.  This 900m climb up the mountain without a water stop for the next 17K was difficult.  In order to survive, I slowed down my running pace to conserve energy.

On a previous training run in Hawaii, I had also ran out of water because at the top mountain flat, there was supposed to be a water stash, but when I had arrived, all the water was gone.  In order to survive, I ate some native plants and slowed down my running pace.  However, this time it was a different terrain and didn’t know what plants had sufficient water that I could eat.  So I found a juicy large leaf on trail and tried to suck the water from the leaf but it tasted sour and my throat started to burn.  Not good.  I saved the leaf and then looked for a mountain stream.  Desperate for water, I decided to take a chance and drink from the mountain stream.  The water flowed over a rock and the water looked clear.  I took the leaf and used it to hold the water and took large gulps of water.  The best water I’ve ever tasted.  I then continued up on the trail hoping that I could survive the next 10K without water.

After drinking from the mountain stream at 600 meters up the mountain, I would continue another 300 meters to reach the top and then back down 600m to the water station.  But where was the water stop?  As I ran down the mountain, I asked the race guides.  From my memory, the race map detailed the bottom of the mountain.  However, when I reached the bottom, I had to run 3K up on the road to reach the water stop. An oasis of sports drinks, water, and food was awaiting.  After I drank a couple of bottles of sports drinks, I asked if I could take these bottles of water.  The friendly staff said yes and gave me directions that pointed right back up the mountain.  This next section of the mountain run was less stressful because I was carrying two bottles of water and a cut portion of a banana.

This second section of the 900m mountain course was similar to first section with beautiful mountain forests and running mountain streams. However, the two bottles of water was not enough for this type of terrain and distance about 17K. Due to the high rate of energy being used, I had to compensate. I slowed down my pace, used the cool forest shade, and used my trail running training experience to safely navigate downhill. I survived two 900m mountain peaks and could see the next checkpoint.

When I reached the next checkpoint I had finished about 48K just before noon. I was happy to be alive and to see my second gear bag for the road portion. My road bag contained my Camelbak water bottle, food, and my road running shoes.  The next portion of the race was an 875m climb on road plus trail.

As I started the road run uphill, the temperature at noon reached 86F (30C) degrees.  The sun and heat became unbearable so I started walking.  In addition, the fatigue from the two previous climbs wore me out.  This was the worst part of the course because I don’t like running uphill in the heat especially on road. Lucky, at the top of this course was forest.

The forest was nice and cool but a portion of it had tall grass stocks.  The tall grass stocks was like running in a maze because you don’t know where it was leading you.  All of the sudden, it opened up into a trail with stairs.  These stairs lead up the mountain with a climbing ladder on several sections of a cliff.  As a rock climber, these skills proved to be useful on this course. After reaching the top at about 875m, I descended on this trail for about 800m. After this long 20K section was done, I was thinking, “Wow, I only have 30K to go and then I can have dinner”.

At this time, it was about 4:30PM too early for dinner and I had completed 70K.  The last 30K I thought would be smooth flat straight roads.  To my surprise, it went back up 400m on the same mountain road that I cursed about previously during noon, however it was near dusk and a lot cooler.  Therefore, I was able to run most of it at a much quicker pace.  It’s amazing how much the temperature change effects running.  So much so, I started to run at my marathon pace, fast. During the last leg of the race, I descended down 500m for about 20K and passed four people on the way.

For the last 30K, my strategy for the race was to start slowly in order to conserve energy and finish up fast. In fact during the beginning of the race, I was last runner out of the start because I was in the bathroom when the start gun went off at 5:30AM.  As they closed the starting line, I hurdled over the poles being set up for the next race.  Finally, at around 6:30PM I approached the finish line and I started to sprint.  My rule in racing is if I can see or know I’m approaching the finish line, I give it all I got.  However, the finish line was not in the same place as the starting line.  Therefore, I had to zigzag around the course to find it while yelling at people to get out of my way.  Finally, line of sight to the finish line, I kicked my stride into my track style sprint and finished across the ribbon tape.  I was happy to finish one the most challenging 100K courses, moreover happy to see friends at the finish line.  They told me I finished tenth but I didn’t care because I was happy to see them and take a picture. I survived and just in time for dinner!