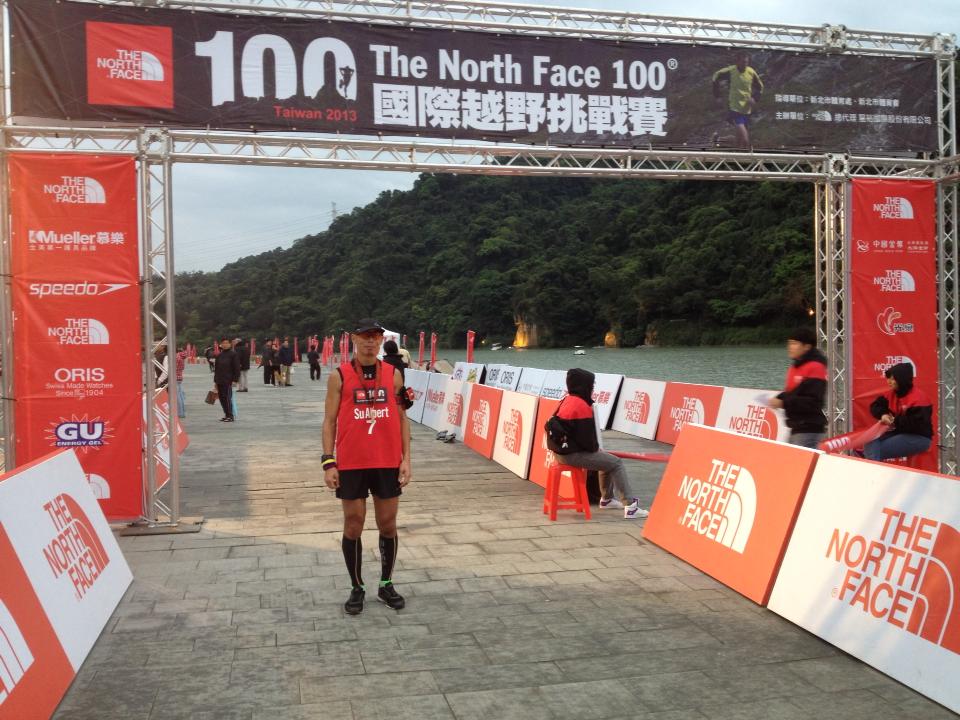 Conditions were light rain with very little wind. Race kicked off at 6:00AM, started 50M above sea level but gradually climbed to 100M at the 15K mark where the 50K and 100K runners split into two different courses. During the first 15K, my pace was slightly below marathon pace, my clothes was slightly damp, and the time flew as I was talking and running with Ruth Croft who that day won the 50K. After the course split, the course continued 100M in elevation, on beautiful mountain roads, passing several waterfalls, one of which was a gigantic waterfall about the size of Yosemite Falls. The road ended at the forest checkpoint, our bags that we had prepared earlier awaited so that we could change into trail running shoes. I quickly changed into my 5 finger socks and trail running shoes while eating a partial sweet potato that I had prepared as lunch.

As I prepared to climb 150M of steep 10K narrow trails, I could hear local racers cheering each other on in the background. On trail, I felt like a mountain goat as I navigated quickly dancing on narrow 1.5 foot wide dirt trails next to steep cliff drops. My type of trail running since most of my training was in Hawaii on the race circuit of Xterra. During this portion, the course reached the highest point, 400M, a change of elevation of 350M from the start. This trail run portion was extremely challenging because we had to cross three mountain stream crossings, two rock climbs over streams, and one ladder climb up and down on trail. Not only did one have to qualify to enter this race, but apparently be a rock climber too. After I finished the trail portion at a blistering pace, the next portion was a mountain peak of climb of 100M. Since the trail run was shortened due to the rains, we had to run this mountain route twice! At this point, I had completed a marathon, a 10K trail run, and now this? A bit too much on my knees and during the second time running down the mountain road, my right knee became inflamed. Last year, before the Boston Marathon, it was my left knee that was inflamed. Lucky, I had carried ibuprofen and salt tablets, which help me recover, somewhat. After finishing half of the race, I looked forward to the return trip. I had run for about 6 hours, approximately 36 miles, and it was about noon.

During the reverse route, I felt my legs picking up the pace and then started to zone out. Some would call this “runners high” as most of the body functions shut down except for the portions needed to sustain running. Half asleep and running, I dreamed and drifted into nothingness. A Zen feeling of peace, the ultimate high, no worries, beautiful waterfalls, scenic gorges, mountain rivers, and hot springs. Before I knew it, I was crossing the bridge at the 85K.

During the last 15K, I started sprinting thinking I could hit my marathon sprint pace and cruise in, however after 5K, my quadriceps leg muscles started to give out. I slowed down my pace slightly until the last 3K mark where an angry black dog approached me. As the dog started to bite, I swerved and almost ran into traffic. Adenine pumped into me and I felt a surge of energy. With this energy, I sprinted with high full kicks, arms chugging at full pace across the red ribbon finish line, a perfect photo finish.