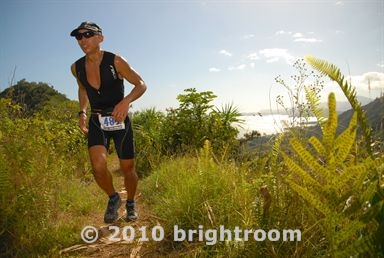 The first series of races started with the Xterra World Championship 21K Trail Run. After finishing part of the year as a triathlete, that season ended with the Ironman 70.3 triathlon in Hawaii and my running season started with the December 5, 2010 Xterra Trail Run. My training started in October with a couple of very long trail runs uphill, downhill, and over beaches. My typical training run would be a three and a half hour trail run in the afternoon to early evening. My route would start with a 3 mile run on the beach then up a 1,600 foot switchback and a 10-mile run on the flats before descending 3 miles. This route was my most challenging route especially at sunset because I would find myself running in the dark. 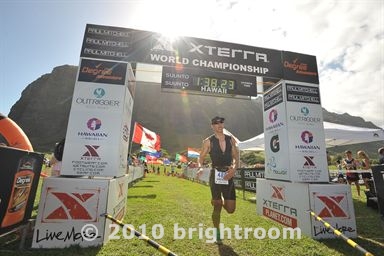 On race day, this year’s course was even harder than last year’s course with more rolling hills and a slightly longer course. I finished this grueling trail run in 1:38:24 with a 7:37 minute mile average pace just a half a minute behind Melanie McQuaid, an Xterra World Championship triathlete. I had improved my overall time by seven minutes and also had not fallen into the ravine caught on XterraTV cameras from the previous year. This year somebody else had fallen into the ravine caught on XterraTV and later viewed at the post race dinner. 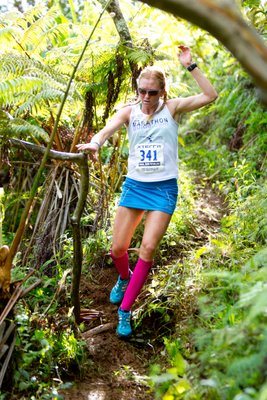 At the post race dinner, I had sat down at a table next to a two-time NCAA All-American and a US Olympic Marathon Trials qualifier but I did not know that at the time. Sally was very friendly and personable as we talked about races, educational background, and that day’s race experience. During the dinner, we watched that day’s race video scene where she had fallen into the ravine, climbed out, and remarkably took first place. We all shared a laugh at Sally’s expense but she had a great sense of humor and smiled throughout that scene. Afterwards, we exchanged contact information and kept in contact through emails. I had kept her informed about my races and was about to write about an upcoming race but never got to write to Sally before her untimely death one month before the Boston Marathon. I will surely miss her spirit for racing but most of all her sense of humor and friendship
.